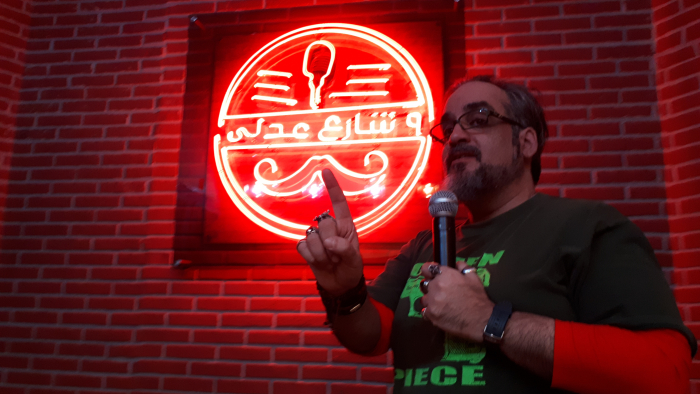 Saif Abu-Kandil started in London (UK) in 2002 while living there, in 2005 at his first Edinburgh Fringe Festival, was on BBC’s 60 Comics in 60 minutes. At the 2006 EFF (Edinburgh Fringe Festival) was in Patrick Monahan’s Do the right thing, in 2011, appeared on Set List opening for Rick Overton that night, as well as other shows during the festival. In 2014, became the Managing Director of Al Hezb El Comedy, during that time, worked with Paul Provenza and Troy Conrad introducing Set List to Egypt (in Arabic as well); subsequently took Al Hezb to the EFF 2014 with the show Falafel, Houmous, & Baba Ghanoush at The Stand. At the start of 2015, Saif Abu-Kandil left Al Hezb El Comedy and started Ronin Comedy Productions; at the same time, Saif A.K. (formerly Steve Kandel) was born. Has performed with: Patrick Monahan, John Robertson, Simon Munnery, Martin Mor, Bronston Jones, Anil Desai, Imaan Hadchiti, The White Sudani, as well as Paul Provenza and Troy Conrad’s Set List in 2011 and 2014

This was made back when I was using my “white man’s stage name” of Steve Kandel (a lot of people hear Steve when I say Saif) https://youtu.be/MkUHcf9kPjM

Now there is an updated sort of showreel on my facebook page www.facebook.com/funnyphatman  and for my online content there’s www.facebook.com/RoninComedy which always has links to the new youtube channel am working on