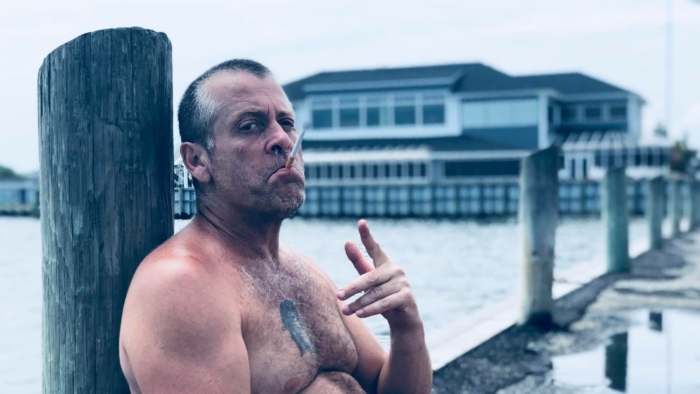 Who is Crazy Robert?

He was born Robert DeFilippo, on July 4th 1967 from North Babylon, Long Island. I remember Robert being one of the most feared teenagers in all of North Babylon.

I remember back in the 80’s Robert would walk around the summer streets with no shirt on, a pair of sweatpants, one leg pulled up to his knee cap, smoking a Marlboro Red, and walking his untrained pit bull on a leash. We would be playing two-hand touch in the street and immediately stop in our tracks just to get a glimpse of him walking by.

I remember Robert being massive. I mean like totally jacked. He would literally have a workout bench on his front lawn. One of the best things to witness growing up was walking by and seeing Robert bench press 250 pounds while talking to himself. It was pure entertainment.

Now the interesting part of this story is that my mother and his mother, Jean, were best friends. One of their favorite things to do together was to play Bingo at the church. Whenever they would go, Robert would babysit me at his house. The first time I was there, Robert was lying on the couch watching MTV. I was in one of the bedrooms making loud noises with his younger brother Boozie. Out of nowhere, Robert stormed into the room, grabbed the both of us and said, “Sledgehammer is my favorite song and I’m going to get really pissed off if I can’t hear it.”

Honestly, I could not get enough of him. I would go up to Robert and start asking questions about the dog. I was amazed to find out that Robert really believed there was an actual dog on the leash. As time progressed, Robert was eventually diagnosed with Schizophrenia and Psychosis. I was never scared to be around Robert. He was and still is, a huge teddy bear at heart.

As time continued to progress, Robert would come to my house everyday asking me for money. Yet, before giving it to him, I would invite him in and have conversations with him. That’s when I realized Robert is a genius trapped inside a broken mind. And from that point on, we became best friends.

It was the summer of 2011, and I was seriously thinking of starting a comedy show. I was at Robert’s house for a party and he was in a really good mood and totally shit faced. I grabbed my phone and started recording him. When I stopped, I said to him, “I’m going to create a comedy show and I want him to be one of the stars.”

He looked directly at me with one eye, while the other was looking for Pluto and said, “Who am I going to be, Crazy Robert?”